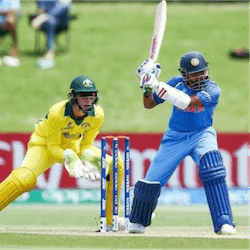 India and Australia are the two sides with a record three U19 Cricket World Cups apiece, and they faced off in their opening Group B match of the 2018 tournament on Sunday at Mount Maunganui’s Bay Oval. It was not an auspicious start for Jason Sangha’s team.

India won the toss and elected to bat, and captain Prithvi Shaw and his opening partner, Manjot Kalra, delivered India’s highest opening partnership in the U19 CWC. They racked up 180, with man-of-the-match Shaw scoring 94 and Kalra 86.

The Indians finished on 328/7, becoming the first team to score more than 300 against Australian bowling in the U19 CWC. It proved enough. Despite a 73 off 90 balls from opening bat Jack Edwards, the Aussies were all-out in the 43rd over for 228; a 100-run drubbing.

Bangladesh Two Up Already Despite Rain

In Group C, Bangladesh played their first match on Saturday, and was hit by the changeable New Zealand weather. Rain reduced the match to 20 overs, with Bangladesh batting first and scoring 190/4. In their 20 overs, Namibia could only manage 103/6.

On Monday, still at the Bert Sutcliffe Oval in Lincoln, Bangladesh faced Canada, and this time the weather allowed a full ODI. Again batting first, Bangladesh scored 264/8, then bowled the Canadians out for 198 in 49.3 overs.

However, England is also in Group C, and likely to overpower Namibia and Canada as well. The most exciting clash in the group is likely to be Thursday’s England v Bangladesh match.

Afghanistan and New Zealand Among the Winners

The biggest upset of the tournament’s opening weekend was Afghanistan’s five-wicket win against Pakistan in their Group D Cobham Oval match in Whangarei. First, the upstarts bowled their opponents all-out for 188 in the 48th over. Then they knocked up 194/5, requiring one ball fewer to do so.

In the other Group D match at Cobham Oval on Sunday, Sri Lanka beat Ireland by seven wickets. In Saturday’s Group B match at Lincoln Oval, Zimbabwe took a 10-wicket win against Papua New Guinea in another match shortened to 20 overs by rain.

In Group A, New Zealand upset reigning U19 CWC champions the West Indies with an eight-wicket win at Bay Oval on Saturday, and on Sunday at Lincoln Green, South Africa beat Kenya by 169 runs.