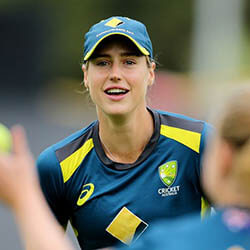 Superstar player Ellyse Parry has hailed Cricket Australia for improving the conditions for female cricketers, who have since become the envy of other nations from around the world. While the ICC had increased its World Cup prize pool for the 2020 women’s World Cup by a total of 320 per cent compared to last year’s event, Women Sport Australia said that it still remained half of what the men earned later in the year. CA announced that it would top up prize money for Australia in the women’s World Cup in order to stay in equal ground with the men’s side. It’s expected that this will cost the CA up to $885,000 should the Australian side see victory at the tournament.

All rounder Perry, talking to reporters, stated that she thinks it shows that the leadership of Cricket Australia want to see growth in women’s cricket, and not just n the country, but around the world. She added that for them to support women players in the way they have with the prize money announcement has been a contributor to the change seen in the industry over the last few years, and that it has been no less than professional and will benefit both domestic and international players.

CA also launched a parental leave policy that will support their cricketers through pregnancy and adoption, as well as their parental responsibilities. Rachel Priest, Thunder’s New Zealand wicketkeeper, said that she and others felt a bit jealous about the investment in women’s cricket.