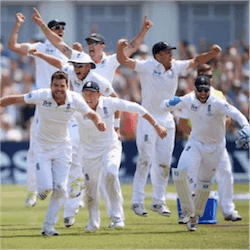 They say that rugby is a game for gentleman played by ruffians, and soccer is a game for ruffians played by gentleman. At present, it looks like Test cricket is a game for Englishmen pretending to be drunken soccer yobs on a booze-cruise round Europe.

England’s Ashes side has seemingly reconciled itself to the fact that it’s going to get thoroughly pummelled this year, and have decided to ensure that they’re remembered in Australia for their bad behaviour instead.

It looks like Ben Stokes’ suspension for a lager-fuelled late-night brawl in England before the tour even got underway has been no deterrent. Two more players so far have chosen rather to follow his example, presumably in the hope that everyone loves a bad boy.

The Baggy Greens are certainly loving it; every match brings fresh sledging opportunities. The constant ribbing won’t be any help to a side going into Thursday’s third Test two down and facing an early series loss.

Ben Duckett is the latest self-inflicted English casualty. Although not in the Ashes team, he was among a handful of fringe England A players set to face off in the England Lions side against a Cricket Australia XI in a two-day fixture starting Saturday.

A stellar knock at that match could have put the 23-year-old left-hander back in contention for the Test side. Instead, he got himself suspended for the three final England Lions games of the tour, allegedly for pouring a beer over England vice-captain James Anderson in a Perth bar on Thursday night.

The altercation last month is said to have happened in the same Perth bar that witnessed Duckett’s faux pas, while Bancroft was visiting home turf before flying to Sydney for a Sheffield Shield match, and England were playing a warm-up game at the WACA.

The England and Wales Cricket Board is still investigating, but it appears that after words were exchanged, Bairstow allegedly headbutted Bancroft. The WA youngster is playing his first Test match on home soil at the WACA starting Thursday, so Bairstow can expect the sledging he’s already received in the first two matches to redouble.