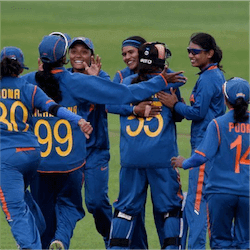 The ICC Women’s World Cup Qualifier 2017 reached a thrilling climax in Colombo on Tuesday, when the final between India and South Africa got to the last ball of the last over with a win, loss or draw still possible for each side.

It was a thrilling match to cap a tournament in the Sri Lankan capital that has otherwise been quite predictable, with very few upsets to whet the appetites of Australian betting fans. That said, there were still plenty of excellent individual and team performances worth a punt.

The qualifiers also proved a good forum to check out the strengths and weaknesses of India, South Africa, Sri Lanka and Pakistan, who finished at the top of the table. The four will now meet Australia, New Zealand, West Indies and hosts England when the ICC Women’s Cricket World Cup starts in June.

South Africa lost just one match in the Super Six, to India, so the two met again in the final. South Africa won the toss and elected to bat, but didn’t quite make their 50 overs, finishing all out for 244 off 49 overs and 4 balls.

At first, India looked set to win comfortably: after 43 overs, they were on 4/209. But four quick wickets in two overs had them on the back foot. South Africa kept up the pressure, and it came down to Indian batter Harmanpreet Kaur needing eight runs off the last two balls in the final over. In awesome style, she smacked Marcia Letsoalo’s next delivery for six, and secured India’s victory by knocking the final ball away for two.

By and large, the results in the pool stage were predictable: the teams in the qualifier because the finished bottom-four in the 2014-16 ICC Women’s Championship, namely India, South Africa, Pakistan and Sri Lanka, each finished in the top two of their pools, and then the Super Six. Ireland and Bangladesh, who made the qualifier via their ICC ODI status, finished third in Pools A and B respectively.

Regional qualifiers Zimbabwe, Thailand, Scotland and Papua New Guinea crashed out in the pool stage without creating any upsets, with Thailand and Papua New Guinea whitewashed. Only hosts Sri Lanka managed a surprise, beating Pakistan in the first match of the Super Six. Pakistan’s pathetic 67 against India then allowed Sri Lanka to finish third, while Pakistan dropped to fourth.