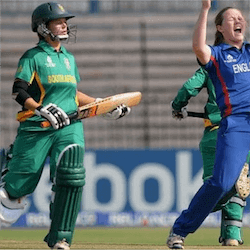 Tournament hopefuls South Africa and India have both cruised to victory in the opening matches of their respective campaigns with Devika Vaidya hitting an impressive 89 runs to bolster her team and in the end helped them win by a comprehensive 114 runs. South Africa’s Chloe Tyrone belted a quick 79 runs and greatly helped her team to secure a respectable 63 run win over their opponents, Pakistan. Ireland then took down Zimbabwe with a 119 run victory while Bangledesh supplied Papua New Guinea with a solid defeat of 118 runs.

Teams have now well and truly begun their journeys towards qualifying  for the ICC Women’s World Cup as well as the ICC Women’s Championship. In addition to qualifying for these 2 mamoth events, the tournament of 10 teams also offers ODI status to all the teams that get into the Super Six Stage for 4 years. That is a huge accomplishment as  teams can then compete in a wealth of ICC tournaments in between World Cups and Women’s Championships.

South Africa then went on to play Scotland in what was Scotland’s opening match, but South Africa proved to be too strong for them and the Scot’s were defeated by 6 wickets in Colombo. Meanwhile Sri Lanka beat Ireland and Pakistan won against Bangladesk by 67 runs. India then went on to demolished Thailand and bowled them out for a paltry 55 runs on the day.

The top 3 teams in each of the 2 groups will then proceed to the Super Six stage where the top 4 will qualify for the ICC Women’s World Cup which is due to be held in England later in the year so we can expect to see more world class cricket as the tournament progresses through towards the Super Six and the pressure builds up for the top teams of this fantastic tournament.