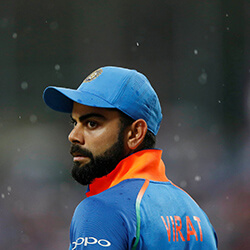 India have claimed their first ever series victory while playing in Australia after their fourth Test in Sydney finished in a draw.

Play was forced to be called off to the persistent rain that was plaguing the teams for the final day of the Test, and not a single ball was bowled during the match, meaning that the game ended in a draw that gave India a 2-1 series win. Australia had been scheduled to resume their innings on six for no loss, which followed from their 300 all out in their first innings, and were set to chase India’s huge total of 622 for seven.

It marked the third day in a row that play in Sydney was directly affected by either rainy weather or terrible lighting, with only 25.2 overs possible during day four. After the game was abandoned at 2:30pm in the afternoon, India captain Virat Kohli praised his team as he spoke of the pride of this otherwise historic victory for the team. Being quoted on the International Cricket Council website, Kohli said that they had been to this country three times in the past, and to win this series was something that they had not managed to do previously, and it was extremely special to him and his team.

He added that it was just a stepping-stone for them, and because they are a young side, he believes they will go far in the coming years.