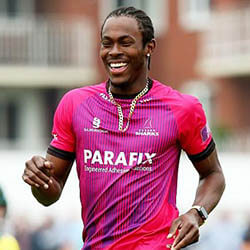 Jofra Archer has lead his team of the Rajasthan Royals to a three wicket victory against Kolkata Knight Riders for his final Indian Premier League match before he heads to England’s pre-World Cup training camp. The 24 year old Archer managed to claim six to allow the Royals’ to reach their target of 176, subsequently ending their unbeaten on 27 off of 12 balls. The hosts earned 175-6 with captain Dinesh Karthik firing 97 in total not out.

Talking about his latest match, Archer said that he was upset about leaving but that he going to something that is important to him, and that hopefully the English selectors will see that he is able to do and can get him to a point where he can start contributing to his team. Archer was not picked to be part of the preliminary 15 man World Cup team despite qualifying to play for England after there was a change in residency rules.

He was, however, named for the first time in the one-day team that’s set to face Pakistan and Ireland, and has the chance to make it into the World Cup if he is able to impress enough during the pre-tournament matches, as changes can still be made over the next month. Fellow pace bowler Chris Jordan and Archer will be joining with the team in Cardiff, where England will be competing against Ireland before their five match series against Pakistan.