Jonny Bairstow Claims 80 Not Out For Sunrisers Victory 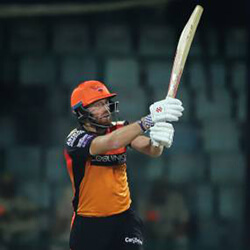 English batsman Jonny Bairstow claimed an unbeaten 80 as the Sunrisers Hyderabad bested the Kolkata Knight Riders with 5 overs in the Indian Premier League. Bairstow took the win with successive sixes that he played off of Indian spinner Piyush Chawla. The 29-year-old player for Yorkshire has scored a total of 445 runs for his nine IPL innings so far this season, with an average of 63. Bairstow has also confirmed that he won’t be taking part in the whole season as he intends to head home and start preparing for the national team’s training camp in England as the team gets ready for the World Cup.

Him and David Warner shared 131, marking it as the first time that an opening pair of batsman has claimed four century stands for a Twenty20 season. Warner, who was eventually knock out for 67 in the 13th over, is leading this IPL season’s scoring list just ahead of Bairstow with a total of 517 in nine innings, which features six half centuries and the highest of 100 not out, and saw him reach 500 runs for his fifth IPL campaign in a row.

The Sunrisers are currently fourth on the roster, two points behind the Mumbai Knights as well as the Delhi Capitals, with the top four qualifying for the upcoming play offs. The Knight Riders are in sixth place due to their fifth successive loss so far this season.