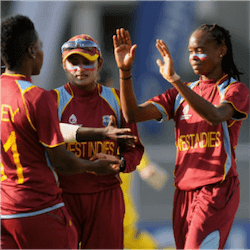 Australia’s cricket fans only get to enjoy the ODI World Cup for Women every four years, and since it takes place halfway between each Men’s World Cup, it offers great international betting alternatives to those suffering ODI World Cup withdrawal too.

Officially, the tournament is the ICC Women’s Cricket World Cup, to be hosted in 2017 by England from 24 June to 23 July. Eight teams will be contesting the Cup, with the favourites those that qualified automatically by finishing in the top four during the 2014-16 ICC Women’s Championship: winners Australia, runners-up England, plus New Zealand and West Indies.

The other four contenders in the 2017 Women’s CWC, namely India, South Africa, Sri Lanka and Pakistan, all won their places at qualifiers in Colombo earlier this year. The action kicks off on 24 June with two matches: hosts England meet India at the Derbyshire County Ground in Derby, while New Zealand meet Sri Lanka in Bristol.

As the top-ranked team in the 2014-16 Women’s Championship, six-time Women’s Cricket World Cup winners, and the defending 2013 champions, the Southern Stars will be getting loads of betting support from loyal Australian punters in England.

They play their first match of the tournament on 26 June, the day after South Africa and Pakistan play their first match in Leicester. Australia will be facing West Indies first up, a strong opponent made even more daunting by Rene Farrell’s announcement that she has retired from ODIs, meaning the Aussies will be without her fast-bowling skills against the Windies’ batting attack.

That said, each team plays all seven of the others during the round robin stages, so there is no game in which the Stars can afford to be complacent. Apart from the Windies, though, their biggest challenges should come later in the tournament: against New Zealand on 2 July, England on 9 July, India on 12 July and South Africa on 15 July.