A Look At The 2017 Woman’s Cricket World Cup 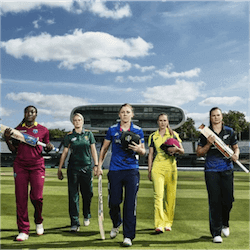 The 2017 Woman’s Cricket World Cup gets underway on the 24th of June this year. All of the top female players from around the world will descend on the UK as England play host to the prestigious limited overs tournament. With qualification already confirmed, Australia’s Southern Stars will want to repeat their previous success and retain their title when the final is played at Lord’s on July the 23rd. This is the third time the World Cup has been held in England. The home side emerged victorious on both previous occasions in 1973 and 1993.

When the tournament kicks off on the 24th of June, all eight teams will go into a single group and play each other at least once in the opening stages. The top four teams in the group will then progress to semi-finals where the winners will move on to play the Cup Final at Lords on the 23rd of July. Australia’s Southern Stars were the first team to book their place in the tournament. They topped the log in the Woman’s Championship, winning a massive 18 out of their 21 matches.

England were the second team to qualify for the tournament while New Zealand and the West Indies snapped up the final two qualification spots. While they might have missed out on a top-four placing, South Africa, Pakistan, India and Sri Lanka all confirmed their places via the qualification tournament while Scotland, Bangladesh and Ireland were amongst the team who all missed the cut.

While the official betting for the tournament has yet to open, World Cup Futures bets have been going for a few months now. Leading the charge is Australia at odds of $3.50 with South Africa at odds of $5.00. The full list of futures odds betting is as follows: