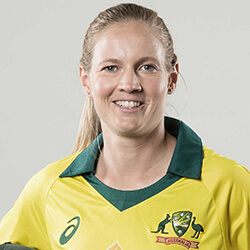 Lanning became the closest player to 13 hundreds (in men’s or women’s matches), achieving the target in just 76 innings to overtake batsman Hashim Amla from South Africa, who accomplished the achievement in 83 innings.  But Lanning wasn’t Australia’s highest scorer. Alyssa Healy also produced a hundred and placed the second wicket, the second highest partnership for any wicket for Australia, on a 225 point stand with Lanning after Shamilia Connell bested Rachel Haynes on the first pitch.

In just 95 shots, Healy achieved the 100-run mark and moved to 122 before dropping in the 39th over to Afy Fletcher. Chasing 309 for winning, West Indies got off the worst beginning possible as Megan Schutt hit for a duck with the very first innings ball to bring Natasha McLean home. In the first two innings, the hosts were reduced to 8 for 3 after Ellyse Perry struck twice in the same over to get rid of Stacy-Ann King and Kyshona Knight, not allowing the two batsmen to score any runs. With Georgia Wareham selecting a brace and four others snatching a wicket piece, more shots were to follow. Stafanie Taylor waged a solitary fight with her steady 115-ball 70, but was not matched by her peers, as the only other female from the West Indies to achieve the double-digit mark was Chinelle Henry, who made only 14 runs.