Michael Clarke Opens Up About Separation 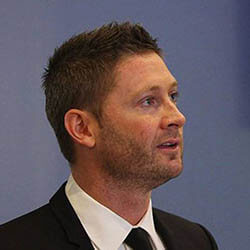 Former Aussie cricket skipper Michael Clarke has reportedly spilled the beans about his split with ex-wife Kyly Boldy after seven years of marriage.

Now dating fashionista and designer Pip Edwards, the couple’s flaunting of their relationship on social media has prompted new questions about the reasons behind the dissolution of the former captain’s marriage to Boldy.

Sharing and co-parenting a four-year-old daughter, Clarke says the pair remain good friends after their break-up announcement in February. He also said he counts himself lucky to remain “great” friends with the mother of his child, and that a mutual decision to prioritise their daughter played a leading role in their decision to actively work on a healthy and strong friendship.

Even so, said Clarke of balancing fatherhood and co-parenting with a new romantic relationship in the picture, since there are families, friends, and several other people involved in the new dynamic, keeping it al together by remaining respectful of everyone part of the new dynamic, is much easier said than done.

The couple’s saving grace was according to Australia’s fourth-highest Test runs-scorer the fact that they had managed to keep their separation away from the public for months after they first decided to part ways. This, said Clarke, not only afforded them the time heal emotionally, but also to work out the logistics of co-parenting without any prying interference from the media. Break-ups are always tough, said the cricketer, which is why keeping the news from the media while adjusting to their new lives apart from one another proved a dealmaker for happiness and moving on.