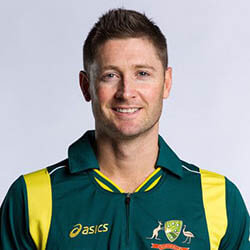 Batsman Michael Clarke has been appointed as an Officer in the General Division of the Order of Australia as part of Queen Elizabeth II’s Birthday Honours List. He will be joining a list of respected players and former Australian Test Cricket Captains like Mark Taylor, Ricky Ponting, and Steve Waugh, all of whom have received the same distinction.

Reflecting on the day he received news of the accolade recently, Clarke revealed that he had originally thought it was an elaborate April Fool’s joke. This is when he first heard about it, even though we are already in June! Clarke says its a dream come true for him, and something he has been hoping for since he started playing Cricket.

He said that he’s absolutely floored that he’s to receive such a prestigious award and that it can truly be described as the culmination for his wildest ambitions as a young player. To be recognised in this way whilst living the dream of playing his beloved sport at the highest possible level is a mark of merit he is profoundly grateful for.

Clarke received his AO for delivering distinguished service to the game as a player at both domestic and international levels, through roles as a leader, and to the community at large. He retired from International Cricket in 2015, after a decorated career that saw him collecting four Allan Border Medals. This is widely held to be the single most prestigious individual prize in the country.