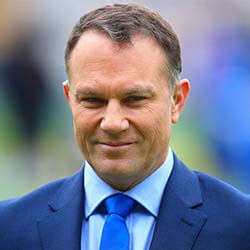 He was formally arrested while at home in the Sydney region before he was taken to the local police department. Once there, he was apparently interviewed and later on charged with having made use of a carriage communication service to offend or menace – and with stalking and an intention to inflict physical harm to boot.

According to a statement issued by police shortly after, an investigation had been launched on Tuesday after officers at the local police command centre received complaints relating to a supposed domestic violence incident alleged to have occurred on October 12.

Slater recently lost his job as commentator with Channel Seven. This means he won’t be part of the network’s commentary team for the upcoming cricket season. The network had cited financial pressures as the reason for the decision not to renew his contract.

A former opening batsman for Australia, Slater played in 74 Tests for his country become making his maiden Ashes tour in 1993. During his career as a Test cricketer, Slater scored 5312 runs.

He also starred in 42 ODIs and ended his career with 1,000 runs under belt. He announced his retirement from international cricket in 2004.

The former national cricketing star has been granted conditional bail and is due to appear in court in November.