New Zealand vs England: ODIs Next 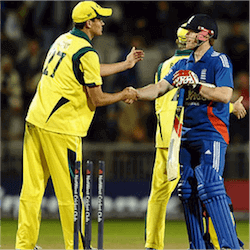 The English men’s cricket team is in no hurry to return to a chilly northern hemisphere; they’ll be in New Zealand enjoying the summer till April. Which is good news for online sports betting fans; the boys in blue are coming off an uneven tour of Australia and a woeful Trans-Tasman Tri-Series (TTTS), so they’ll be playing hard to salvage the New Zealand tour in the remaining five ODIs and two Tests.

Ironically, England took their first T20 victory of the series on Sunday, in the match that also put them out of the TTTS final. After suffering 5-wicket and 7-wicket drubbings by Australia, they then lost their first match against the Black Caps by 12 runs, but came back impressively in the second on Sunday to win by just two runs.

It wasn’t enough to get Eoin Morgan’s men to the final, of course. New Zealand had also lost twice to Australia in the group games, but their earlier victory meant that England had to restrict them to 175 runs or fewer in the last group match, after posting a target of 194/7, to go through on net run rate.

Thanks to some poor English bowling early on, the Black Caps swept past the 175-mark easily, but eventually fell short on 192/4. England now have the luxury of ignoring the final, while they prepare for the opening 50-over game at Seddon Park in Hamilton on Sunday, February 25.

Stokes and Overton On Board for England

On Sunday, England will take the field against New Zealand revitalised with a bit of new blood. Yorkshire fast bowler Liam Plunkett has aggravated a tear in his hamstring, so he’s out for the rest of the tour.

But Plunkett’s replacement could be a player to watch – all-rounder Craig Overton also bowls at pace, and he was making his mark in the recent Ashes series before a rib injury put him out. He’s fighting fit again, it appears, and with 40 wickets from 21 ODI matches in the past year, he could be the surprise danger-man.

Ben Stokes, another all-rounder and a useful fast-medium bowler, will also be back to cause the Black Caps problems. Fresh from his suspension for drunken street brawling, which appears to have gone the way of Morris dancing as a traditional English pastime, the ginger ninja arrived in New Zealand a few days ago, and Morgan reckons he should be fit to play on Sunday.