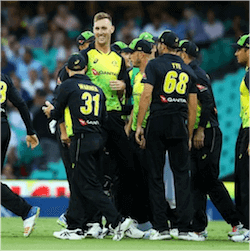 The shift of the Trans-Tasman Tri-Series from Australia to New Zealand for the second half was accompanied by the Black Caps’ first win in the tournament on Tuesday night. They played a day-nighter against England in the Wellington Regional Stadium, and New Zealand delivered England’s third straight defeat in the series.

It was, however, the closest match of the T20 series so far, so the Kiwis will be wary of the wounded lions in their return encounter on February 18. In the opening match at the SCG, the Black Caps lost to Australia by 7 wickets.

The next two matches were between England and the Baggy Greens, in Hobart and at the MCG. The hosts won both, by 5 wickets and 7 wickets respectively.

Tuesday’s match was a lot tighter. England won the toss and put Kane Williamson’s team in to bat, and the Kiwis racked up a respectable 196/5, led by Williamson’s 72 that earned him man of the match, 65 from Martin Guptill, and 20 from debutant Mark Chapman.

England started strong, with 8 off 8 from Jason Roy, followed by 47 off 24 from Alex Hales and 59 off 40 from Dawid Malan. But Malan’s departure heralded the start of a squeeze, and England were slowly throttled to 184/9 by the end of the 20th over – New Zealand won by just 12 runs.

Undefeated in three, Australia is obviously already assured of their berth in the TTTS final at Eden Park on February 21. But a win by England in their second and final encounter could leave the visitors tied with New Zealand on one win and three losses each, presuming Australia triumph again in their second match against the Black Caps on February 16.

If New Zealand beat the Baggy Greens, of course, England stand no chance. But since the Black Caps only need one more win from two games, chances are they’ll be the side facing the Aussies on Wednesday.