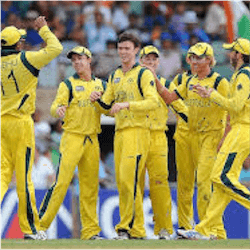 A lot of online sports betting enthusiasts in Australia will be watching and punting on the 2018 U19 Cricket World Cup, scheduled to take place in New Zealand from January 13 to February 03 next year.

The world’s top cricketing nations will all be competing, along with a handful of minnows, giving punters a chance to suss out future great rivalries between the up-and-coming ODI stars of the future as they germinate.

Australia have won the biennial tournament three times since its inception in 1988, leaving them tied with India. This edition, Aussie punters hope that the team can take a clear 4-3 lead in the tournament record.

Sangha to Lead Australian U19 CWC Side

The Australian team will be captained by New South Wales 18-year-old Jason Sangha. The youngster staked his claim to fame when he won his first List A contract with New South Wales in 2016. Barely 17 at the time, Sangha became the youngest contracted rookie in Australian cricket history.

He took another record, in a career that has the potential to be stuffed with them, earlier this year, in a pre-Ashes match for the Australia XI against England in November. In the second match of the tour in Townsville, Sangha scored his first first-class century against England. His 133 made him the youngest Australian to do so, and the second-youngest player in the world, after Sachin Tendulkar.

There are two other names cricket fans will recognise immediately in the Aussie squad for the 2018 U19 World Cup: all-rounders Austin Waugh and Will Sutherland, who has been named vice-captain. Austin is the son of legendary former Baggy Greens captain Steve Waugh, while Will’s dad is Cricket Australia chief executive James Sutherland.

Ntini Another Famous Scion in Play

Cricketing genes don’t run in families only in Australia. The South African side for the 2018 U19 Cricket World Cup contains one Thando Ntini, the highly rated son of retired Proteas fast-bowling ace Makhaya Ntini. The South African team will be captained by young Free State star Raynard van Tonder.

The other U19 teams most likely to threaten Australia’s quest for a fourth Cup are England, captained by Harry Brook, New Zealand, skippered by Kaylum Boshier, India, under the captaincy of Prithvi Shaw, and Pakistan, with Hassan Khan at the helm.