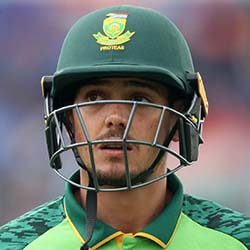 Contrary to rumours currently doing the rounds, South African cricketer Quinton de Kock has not been sent home from the T20 World Cup after refusing to take the knee before Tuesday’s match against the West Indies. He’s currently still in the UAE with the rest of the squad. Even so, whether or not he’ll continue to play in the competition has not yet been announced.

According to an inside source, several meetings are now taking place as Cricket South Africa attempts to plot the best way forward. The source also confirmed that de Kock remains on the roster for Saturday’s game against Sri Lanka.

De Kock is a leading run-scorer for the South African national side, and ranks second on the all-time T20 run scoring leaderboard for the country.

Speaking after Tuesday’s match, team captain Temba Bavuma said De Kock’s refusal to bend the knee had come as a surprise.  But, added South Africa’s very first Black cricket captain, De Kock is an adult and a man of conviction. He said those convictions needed to be respected, whatever they happened to be.

Bavuma also added on Wednesday that he now wants players to focus on cricket and on the competition and to put the drama involving De Kock behind them. The eyes of the players now belong on the ball and on qualifying for the semi-finals, he said.

De Kock withdrew from the team unexpectedly on Tuesday and was for that particular day’s play replaced by Reeza Hendriks.