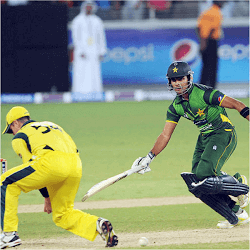 Despite Pakistani batsman Azhar Ali’s heroic 205 not out in the first innings, rain has bedevilled the Australia-Pakistan Boxing Day Test to such an extent that, that a result on Day 5 was highly unlikely. Day 4 also saw rain interrupting the playing sessions, but that didn’t stop Australian captain Steve Smith from making another record-breaking knock.

At stumps on Day 4, Smith was on 100 not out; his 17th Test century. Australia closed the day at 6/465, 22 runs ahead of Pakistan’s first innings total of 9/443. Smith’s century also means he has scored 1,000 Test runs in a calendar year three times. He is only the sixth Australian to accomplish this, along with Allan Border and Mark Taylor. Michael Clarke achieved the feat four times, and Ricky Ponting and Matthew Hayden have managed it five times.

Smith also made his record scores in three consecutive years, scoring 1,146 in 2014 and 1,474 in 2015. Internationally, the only other batsmen to enjoy three 1,000 Test-run seasons consecutively are Hayden, Kevin Pietersen, Brian Lara and Marcus Trescothick. At 27, Smith already has 49 Tests under his belt and many more to come, so the new personal record he set on Day 4 is hopefully just another step on his way to becoming one of the all-time greats.

Not a Great Day for Pakistan

Pakistan captain Misbah-Ul-Haq had every reason to leave the field at the end of Day 4 feeling despondent. Although spinner Yasir Shah has taken two wickets in this innings, claiming Nic Maddison’s scalp on Day 4 for 22 to go with opening batsman Matt Renshaw’s, he has proved expensive as well. He finished the day on 2/150 off 34 overs. Wahab Riaz’s 27 overs also yielded 135 runs for only two wickets, so expensive bowling has been a major factor in Australia hauling in Pakistan’s impressive first-innings total.

The Pakistan captain also saw Ali, his star batsman, take a hectic knock on the head while fielding in close to Matthew Wade off Shah’s spin bowling. Wade’s pull shot smacked into Ali’s helmet, looping up for a catch at short fine leg, but Wade survived because the ball had struck a player’s helmet.

Ali also survived, happily, and has passed a concussion test. So he was free to bat again. But the way Day 4 went, the Pakistan team may just have been hoping for a long, wet Friday, just to secure the draw.