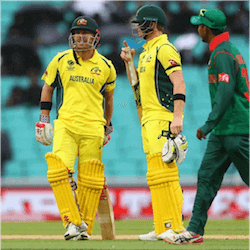 Australia Frustrated as Champions Trophy Match is Rained Out

Rainfall thwarted Australia’s Champions Trophy match ambitions in their game against Bangladesh, and excited the latter team regarding their hopes of a win after the Group A match at The Oval was abandoned.

In the pursuit of 183, the Australian team managed to reach 83 for 1 before the rain began after 16 overs, just 4 short of what they needed for a result. Iqbal made up 95 of the 182 Bangladesh managed all out, with Starc taking 4 wickets in 9 balls. Both sides will be given a point, and England remains at the top of the group’s standings.

Australia on Top as Rain Set In

Australia, who has previously benefitted from rain as in the case with the opening match they played against New Zealand, will have been irritated at the abandonment of the game thanks to the fact that they were on top when it began.

In their match against New Zealand, Australia were struggling at 53 for 3 after 9 overs, and were making a great effort when it came to dealing with the pace bowlers when rain arrived and ended play. This was not the case in the Bangladesh match –they were in total control, and were very steadily moving towards the Bangladesh total when the match was called off.

Capably being supported by Smith, Australia had moved themselves into a prime position in the match before the rain interfered and dashed their hopes. The team was briefly set a target of 166, revised, from 43 overs, but more rain saw the proceedings draw to a halt at 21:21 BST.

The bowlers for Australia seemed to find the rhythm they missed in their game against New Zealand, and Tamim, after making a century on Thursday against England, looked the only player able to successfully navigate the bowlers.

Australia’s fast bowlers, who had been slated by Steve Smith, captain, after the first game the team played, provided this game with both pace and accuracy, and this resulted in Bangladesh being restricted before they completed a composed start.

Semi-Finals are Still an Option

Both Bangladesh and Australia are still in the running for qualification in the semi-finals, with the former team due to play against New Zealand on Friday the 9th of June 2017, and Australia going up against England on Saturday the 10th.