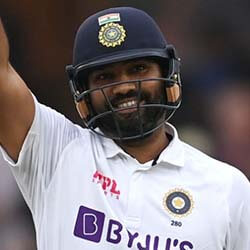 Ronit Sharma is back. And right now, this includes his having scored a long-overdue first Test century on foreign soil against England at the Oval. It might have taken him a little under eight years to do, but he finally did it following a whole lot of patience and with just a tidbit of pure Test cricketing magic on a precariously difficult day three for his opponents.

Sharma himself holds no misgivings about what it takes to get a hundred while on a tour of England. Speaking after the first overseas Test ton of his career, the star India opener said it’s never been easy for any batter to score a century on foreign soil. Instead, it’s a process – and a time-consuming one at that.

Of his stunning performance on the day India turned the tide by halting England in their tracks, Sharma said he’d not come onto the pitch for scoring a century. Instead, the most important thing had been to play balls. That, said the opener, and keeping batting for as long as possible, has always been the goal.

But while a picture of humility, Sharma, in partnership with Cheteshwar Pujara, managed to put together what may very well have emerged as the game’s make-or-break combination. Together, Pujara and Sharma added an impressive total of 153 runs to the scoreboard.

It should be said too that Pujara’s single moment of discomfort had been completely self-inflicted, with his turned ankle the result of a completely unnecessary run with the ball already pacing its way toward the boundary.