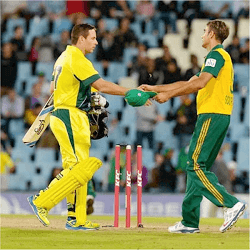 Another Cricketing Whitewash for Australia

Australia has lost their 5th consecutive One Day International match against South Africa, racking up some unwanted accolades. The whitewash completes a three-series whitewash defeat in all formats of the game this year, a first in Australian cricket history. Their 5-0 defeat comes on the back of their recent 3-0 test defeat in Sri Lanka and a 3-0 T20 defeat against India. However with an upcoming home test series still to play, Australia still has a chance to redeem themselves.

Losing Against SA a Major Blow

The 5th and final ODI match against South Africa was held at the Newlands cricket grounds in Cape Town. South Africa won the toss and elected to bat first. Australia got off to a good start with the fired up bowlers striking early on in the game. Scott Boland worked his magic having De Kock caught at cover, while Joe Mennie bowled both Amla and Du Plessis. With runs starting to flow, Mennie redeemed his previous bowling figures by ending the Rossouw-Duminy partnership having Duminy caught at backward point.

Chris Tremain also got in on the action taking a further three wickets as South Africa kept racking up the runs. The top scorer for South Africa was Rossouw putting on an impressive 122 runs from 118 balls. Duminy added to the score with another century from just 75 balls. After 50 overs, South Africa posted as score of 327 for the loss of eight wickets.

An Epic Innings from Warner

Going into bat, Australia looked comfortable and in control. Warner quickly took charge of the game putting away wayward balls. After being dropped by the wicket Keeper Quinton de Kock, Warner charged on, racking up the highest individual ODI score at Newlands. After an opening stand of 72, spin bowler Tahir dispatched Aaron Finch and then proceeded to bowl out Smith two balls later.

Despite a steady knock from Warner, the rest of the Australian team failed to make any headway. Wickets continued to fall around Warner keeping the required run rate between 8 and 9 an over. With the game drawing to a close, Australia still has a chance to seal the deal with Warner batting strong on 173. Scrambling to keep the strike, Warner was run out with the total on 288. Needing over 13 runs an over, the tail enders failed to hold strike with Australia bowled out for 296 in the second last over.

Punters who’ve backed Australia may be thinking twice now, but there’s still hope that the team came make a comeback in the upcoming test series.