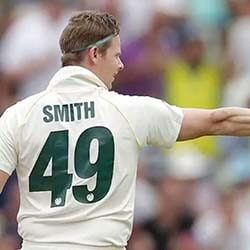 Steve Smith says he’s interested in once again captaining Australian cricket and that he’s grown as a human being since a 2018 ball tampering incident saw him banned from cricket leadership for two years.

The former Australia skipper says if selectors were to want him, and if his resuming captaincy was what the country needed at the time, he’d be more than happy to step up for selection. Cape Town will always be something he’ll have to live with, said Smith in a recent interview, regardless of whether he’s selected to lead again or not.

Smith voiced his full support to Test captain Tim Paine and white ball captain Aaron Finch, who both had their captaincy fitness called into question at different points in time last year.  He however added that if the opportunity presented itself, he’d be more than keen to step back into Australian cricket’s top job at whichever point it was needed.

While fast bowler Pat Cummins, Australia’s vice-captain, has expressed his own interest in leading the national Test side, Australia have for the longest time purposefully steered clear of awarding the captaincy to a bowler. The last fast bowler to have captained Australian Test cricket had been Ray Lindwall, for a single Test back in 1956.

There has been no indication so far from Cricket Australia regarding whether they’d be willing to or comfortable with seeing Smith return to a position of leadership. He was named full-time captain of the national side when Michael Clarke retired in 2015.