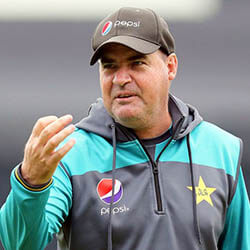 Sri Lanka has confirmed that South African Mickey Arthur will be taking on the role of head coach after he signed a two-year contract. The coach, who previously worked for Australia, South Africa, and Pakistan, has been named as a potential successor to Trevor Bayliss. Rumesh Ratnayake, a former bowler, had been named as the interim coach for Sri Lanka in August after former head coach Chandika Hathurusingha received criticism for the country’s exist in the World Cup.

Arthur had been put in charge of Pakistan for three years, where he led the team to victory in the 2017 Champions Trophy. But the country had decided not to renew Arthur’s contract in August this year after they failed to reach the semi finals for the World Cup.

Zimbabwean Grant Flower will join him as part of his support staff, while Shane McDermott and David Saker will be taking over the roles of fielding and bowling coach jobs respectively. Arthur, talking about the new role, said that he had had three good years with Pakistan, and that he needed a bit of time away, which is when the Sri Lankan job had become available. He added that the he looked over the talent that was available in the team, and that helping the young players fulfil their potential had been a key motivator for him.  His first assignment as new head coach will see him return to Pakistan for their two match Test series this December.