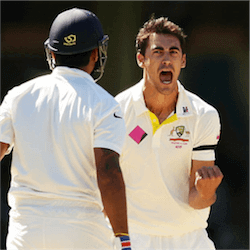 Australian cricket fans are licking their lips at the thought of the England batsmen facing Mitchell Starc in the Ashes. The left-arm paceman has had two extraordinary matches on the trot for New South Wales at the start of the Sheffield Shield, and if he keeps it up, he’s going to help the tournament’s strongest side go all the way in March.

Although the second round had the usual three matches, punters following the Shield could talk about nothing on Tuesday night but Starc’s double hat-trick against Western Australia.

He dismissed Jason Behrendorff, David Moody and Simon Mackin in three consecutive deliveries in the Warriors’ first innings, then repeated the feat in the second innings with Behrendorff, Moody and Jonathan Wells.

It’s the first time a double hat-trick has been achieved in the Sheffield Shield’s 125-year history, and only the eighth time in first-class cricket.

Starc’s match figures of 7 for 97 in 35.1 overs played a significant role in the NSW’s 171-run victory, and his first-class career-best 8 for 73 in 24.4 against South Australia in Round 1 was equally useful. On that occasion, the Redbacks were found wanting by 6 wickets.

But the Blues aren’t the only side to come through the opening rounds unscathed. Queensland took a solid 7-wicket win against Tasmania in Round 2, helped along by Joe Burns’ 70 off 120 balls. The Bulls also won their opening match against Victoria by 110 runs, thanks largely to Usman Khawaja’s 122 off 195 in Queensland’s second innings.

Only bonus points separate the two teams at the top of the ladder, with NSW on 15.2 and Queensland on 14.

Redbacks vs Bushrangers Runs Out of Time

In the third Round 2 match, SA Redbacks and Victoria Bushrangers hadn’t achieved a result by stumps on day four, producing the first draw of the season. Tasmania Tigers, beaten by the Warriors in Round 1 and the Bulls in Round 2, are now bottom of the ladder, with the Bushrangers fifth, the Redbacks fourth, and the Warriors third.