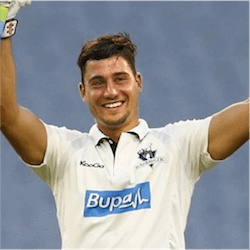 Amid the outrage, counter-accusations and fallout around Indian accusations that Aussie skipper Steve Smith was effectively cheating in the second Test of the Border-Gavaskar Trophy in Bangalore, Australia suffered another blow. Team physiotherapist David Bleakley announced on Wednesday that Western Australia all-rounder Mitchell Marsh would be returning home.

Marsh has been nursing a shoulder injury all summer, Bleakley said. As the Perth 25-year-old’s score of just 48 runs over the first two Tests and his bowling only five overs in Bangalore demonstrated, the injury has deteriorated to the point where he has to pull out of the tour.

Marcus Stoinis Flies Out as Replacement

The Baggy Greens, smarting from their apocalyptic day-four collapse on Tuesday that allowed their hosts to level the series, have called up another all-rounder to replace Marsh.

With Bangalore’s wildly unpredictable pitch on day four playing a major role in Australia’s batting disaster, the team will need reliable batting and consistent bowling, should either of the remaining two pitches misbehave equally.

The man picked for the task is Victoria and Melbourne Stars hot property Marcus Stoinis. Born, like Marsh, in Perth, 27-year-old Stoinis now splits his time between Melbourne and his IPL commitments in Mohali for the Kings XI Punjab.

Record ODI Knock Got Him Noticed

Stoinis is now set to make his Test debut for Australia in Ranchi next Thursday. It’s the top rung of an international career that began with his T20 debut against England in 2015. However, it was his first ODI in the 2016-17 Chappell-Hadlee Trophy on 30 January this year that saw his reputation soar.

Set 286 to chase by New Zealand at Eden Park, the Baggy Greens seemed set for disaster when Stoinis came in at number seven, with Australia still more than 200 adrift in the 13th over. Having done his bit in the Black Caps’ innings by taking 2 scalps for 49 in 10 overs, the six-footer then proceeded to smack a dream ton on debut.

His 146* didn’t allow Australia to catch New Zealand, but they did lose by a mere 6 runs, with Stoinis carrying his bat. It’s the second-highest ODI score in history from anyone batting at number seven or lower, as well as the highest made by a number seven or lower batting second in a losing innings.