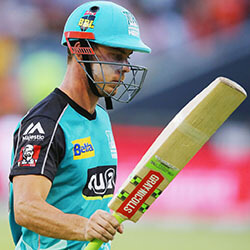 T20 cricketer Chris Lynn has severely criticised Australia Selector Trevor Hohn after he was omitted from the country’s team. Lynn said the only reason he knows he was left out was thanks to it being announced across social media networks. He went on to denounce Cricket Australia’s lack of communication.

Lynn won’t appear on the Australian team for games this summer, and this is being viewed as an indication of in-contention athletes for 2020’s ICC T20 World Cup which will be held in Melbourne. The squad is set to face off against Sri Lanka and Pakistan over the course of the next two weeks.

Even though Lynn has not appeared in the team’s latest matches in India, he’s a T20 staple, and was aggrieved about not receiving a telephone call telling him he wouldn’t be playing. He further disagreed strongly with Hohns’ claim that he had not been playing enough Cricket for his country recently and said that this statement didn’t seem to apply to any other players.

Lynn made special mention of the fact that he has not spoken with Hohns when he said that the lack of communication in Australian Cricket seems to be getting worse. He said that he isn’t just referring to his case and declared that several players don’t know where they stand. He called the situation disappointing.

It’s been reported that selectors may be upset with Lynn. There’s a feeling that he is prioritising his almost $2 million contract with important Indian Premier League teams like the Kolkata Knight Riders over urging for selection for Australia in the 50-Over World Cup.