This Is How Umpires Reacted To SCG Racism 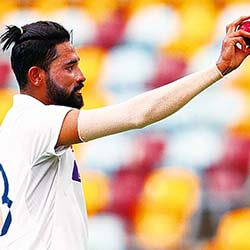 India’s Mohammed Siraj, one of the two Indian players recently allegedly subjected to racial slang and abuse from the crowd at the Sydney Cricket Ground, has now come forward to reveal exactly what was said to him after he reported the incident to on-field umpires Paul Wilson and Paul Reiffel.

According to Siraj, who claims fans during India and Australia’s Sydney Test called him a “brown dog” and “big monkey”, allegedly bore the brunt of the racial abuse directed at himself and teammate and star bowler, Jasprit Bumrah. The allegations are currently being investigated by Cricket Australia. A clearly despondent Siraj has reacted to news of the investigation by saying since the case is now going ahead, it will have to be seen whether justice will be served or not.

The 26-year-old also revealed that after he reported the incidents to India interim-captain Ajinkya Rahane and the on-field empires in question, Wilson and Reiffel offered to the Indian side the opportunity to “leave the game”. Rahane, said Siraj, however decided that since the India side had done no wrong, such a move would have been unfair toward the rest of the players.

Siraj emerged a solid player this season, and eventually went on to guide his side all the way to a historic 2-1 series win. Instead of breaking his spirit and his game, Siraj told news reporters upon his recent arrival back in India, the abuse by the crowd only inspired him on to reach greater heights for his team and country.