The Thunder Drops The Heat Chance 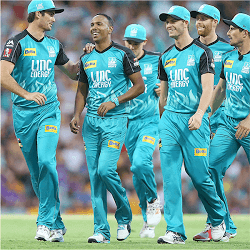 The Heat Undefeated; the Thunder in Tatters

Fans of Sydney Thunder were hoping to see the reigning Big Bash champions break their 2016-17 losing streak at Sydney’s Spotless Stadium on Thursday night against Brisbane Heat, but it was not to be. Cruelly, it looked the Thunder’s first victory of the season might be there for the taking at one point, until the Heat ruthlessly snatched it away with some blistering batting.

Even Sydney fans gave vent to their frustration at the end of the match, and the team left the field to boos from their supporters. It’s hard to blame them: the spate of dropped catches from the Thunder at a crucial stage of the Heat’s innings would have been comical, if it weren’t so frustrating.

After a dream comeback from being the lowest qualifying team on the ladder at the start of the Big Bash semis last season, to eventually winning the tournament, the Thunder had high hopes in this season’s competition, and their supporters had equally high expectations. What they have got instead, is three losses on the trot: to Sydney Sixers, Melbourne Renegades, and now, the Heat.

Almost in the Bag, then Fumbled

Fans probably started to have misgivings at the end of the Thunder’s innings, after they posted only 7/157 in 20 overs: relatively low, by Big Bash standards. Returning captain Shane Watson went out for a duck, and stalwart Andre Russell, his big pink-and-black bat now laminated after the ball-marking controversy, also failed to live up to expectations, making only eight off 10 balls.

Eoin Morgan’s 52 off 43 and Kurtis Patterson’s 36 off 31 were the highest scores in the Thunder’s innings. However, the low total wasn’t necessarily a disaster, as long as the Heat’s innings could be contained. After 14 overs, the Heat had only amassed 6/83, and it looked like the Thunder had the game in the bag.

But ‘in the bag’ is simply not a Big Bash concept: at that point the Heat opened up, scoring a massive 75 off the next five overs and four balls to clinch the match. Hero of the night was Heat batsman Chris Lynn, who finished not-out with 85 off 48 balls. He was helped by some sloppy missed catches from several Sydney fielders, including Russell and Watson.