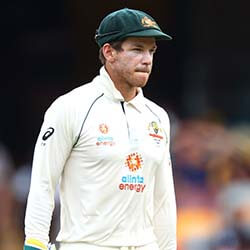 Australian Test captain Tim Paine says he really could not care less about the opinions of his critics unless they’re part of his team. Paine, who says he knew the backlash would inevitably come after Australia’s Test series loss to India, appears unphased by the likes of Indian player Sunil Gavaskar, who called the Aussie captain “hopeless” and (incorrectly) predicted he would not last long after the embarrassing defeat.

Gavaskar’s opinion emerged completely off the mark, with selectors endorsing the Aussie as captain while silencing his critics at the same time, as national chief of selections Trevor Hohns declared Pain in for the haul.

Paine took a lot of rap for field placings and changes to Australia’s bowling outfit leading up to a draw with India at the SCG, and then a loss at the Gabba. He later on conceded that he did mull over things in his head for a few days after, but has since addressed what he believes he did wrong, and moved on. The best way to deal with a mistake is to learn from it, he added, and that’s exactly what Australia has done, and plans on continuing to do in future. Paine said his idea of the secret to success was to always look for ways to do things better, which is how he plans to captain his team.

The Aussie said the only critique that really mattered was the opinions of one’s own teammates. And that his had said he had done a good job.