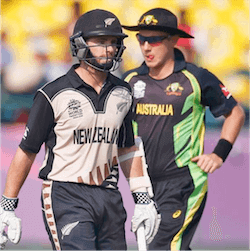 Australian cricket fans were elated by the Baggy Greens’ success in the latest Ashes series, then dumped into the doldrums when England roared back for a 4-1 series win in the subsequent ODIs. The team’s had a reshuffle since then, including David Warner coming in as captain while Steve Smith is rested.

The addition of T20 specialists like D’Arcy Short, Alex Carey, Glenn Maxwell, Kane Richardson, Ben Dwarshuis and Chris Lynn to the team playing the Trans-Tasman Tri-Series also hints at an Aussie side keen to return to dominance in the shorter forms of the game.

The changes paid off in the series opener at the SCG on Saturday, against a New Zealand side that started off the cricket year by having a brilliant home season, only to stumble in their last T20 series and lose the world No. 1 crown to Pakistan.

The slump is continuing; Australia had no trouble putting the Black Caps away with a seven-wicket win, although it has to be said, Duckworth-Lewis helped a bit.

Not that New Zealand were looking too impressive before the rain came along between the innings. The Baggy Greens got to bowl a full 20 overs, and the visitors could only manage 117/9. The rain interruption saw the Aussie target rejigged to 95 in 15 overs.

They managed that in fine style, thanks largely to a top-scoring 44 from Lynn, followed closely by a 40 from Maxwell. Australia knocked up 96/3 in 11.3 overs, to start the series on a high.

Much Tougher Prospects Ahead

England remains the favourites for this inaugural Tri-Series, after their remarkable return to form once the Tests were done and the 50-overs matches started. The New Zealand side will get to lick their wounds a while before they have to face Eoin Morgan’s men on Tuesday, February 13, but Australia are still under the hammer.