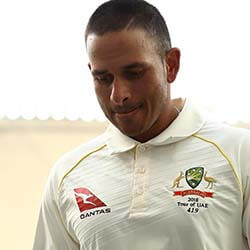 Former Aussie cricket star Usman “Uzzie” Khawaja has accused his ex-teammates of being guilty of backstabbing. While Khawaja and Australia national coach Justin Langer have had their fair share of differences aired in the past, the unwanted star now appears to be backing his former coach with new vigour.

Khawaja’s views do however appear perfectly in line with all that seems to be happening behind closed dressing room doors of late, with media leaks painting a picture that leaves much to be desired in terms of coaching confidence.

The former Aussie star spoke about the relationship between players and coach on his popular YouTube channel, saying Langer probably felt as if his players were stabbing him in the back. Khawaja bemoaned this while referring to the conflict as “disappointing”.

Khawaja also pointed out how the problem isn’t always with the coach or with team management and that the players themselves need to take ownership of the situation as it is right now. What’s more, they need to do so as a team, he explained.

Even so, captain Aaron Finch recently stopped short of punting Langer as the coach best suited to be coaching the side during the run-up to this year’s Twenty20 World Cup. Players are clearly fed up and unhappy with Langer’s mood swings and management style, which some have labelled intense and overbearing.

Khawaja also commented on the explosive Amazon Original insinuating him to have been kicked from the team because of a poor relationship with Justin Langer. He made this off as untrue, saying he (Khawaja) after two years off the team still maintained a good relationship with the national coach.