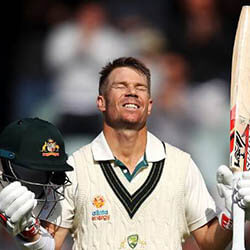 It was a single vote that saw David Warner winning the Australian Cricketer of the Year Award over Steve Smith recently, in the first season back for the two players who got handed a 12-month ban for the Sandpapergate scandal that almost ended their careers. Warner got 194 votes and Smith 193 for the Allan Border Medal, with Pat Cummins taking third place with 185.

Warner spoke of his pride at receiving the distinguished award and mentioned how well Cummins and Smith had done. He said that he’s determined to make good on his come back and aimed to continue apace for the rest of the summer.

Warner and Smith, vice-captain and captain of the team at the time, each got suspended for 12 months by Cricket Australia after broadcasters in South Africa caught them attempting to tamper with the ball in a March 2018 Cape Town Test match. Cameron Bancroft, who got a nine-month ban, was caught trying to scratch the ball’s surface to make it better for Australian bowlers and investigations proved that Warner was part of the plot and that Smith failed to stop it.

In a country where the national Cricket team is revered, this was considered inexcusable. Bancroft, Smith, and Warner took the severity of the bans on the chin although they were the harshest ones ever handed down in the history of ball-tampering in International Cricket. Although several people felt that the disgraced players should never represent Australia again, all three have since returned to the field and Warner and Smith have done superbly.