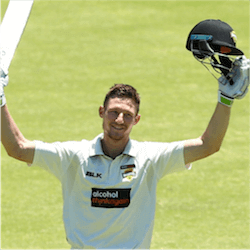 Western Australia cricket fans can’t but be chuffed at Cameron Bancroft’s inclusion in the Australia side to take on England in the first Ashes Test, starting on 23 November at the Gabba.

The 25-year-old from Attaday in Perth delighted the home crowd with his first-class career best score last week, making 228 not out in the Warriors’ first innings at the WACA in their Sheffield Shield match against South Australia.

That is, of course, the downside: with Round 4 of the Shield set to coincide with the opening Ashes Test, WA will go into their next match against Queensland missing a powerhouse in their batting line-up.

The Warriors, after one win and two losses, currently lie fourth on the Sheffield Shield ladder, behind the Redbacks, Queensland Bulls and New South Wales Blues. Bancroft has been the mainstay of the Warriors’ batting, scoring 70 or more in five of his last seven innings.

Jonathan Wells, Michael Klinger and the remaining WA batsmen are going to have to up their game, for the Warriors to stay competitive.

Victoria and Tasmania Bottom of Ladder

Victoria Bushrangers have not had a great start to their Sheffield Shield, losing to the Bulls and drawing with the Redbacks, then drawing again against Tasmania Tigers in Round 3.

For the Tigers, the draw was a step up: they lost their first two matches against the Warriors and the Bulls. Languishing at the bottom of the ladder with 4.31 points, the Tigers are early contenders for this season’s wooden spoon.

However, the Bushrangers are just 6.07 points behind the Warriors, so if they can pull off an upset against the Blues in Round 4, and the Warriors succumb to the Bulls, WA could slip further down the ladder. The third match of Round 4 is the Redbacks hosting the Tigers at Adelaide Oval.