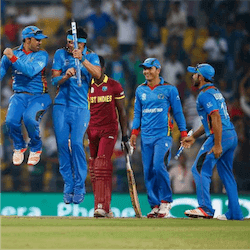 In a bitter disappointment for ODI fans, the West Indies vs Afghanistan decider fizzled out due to unrelenting rain in St Lucia on Wednesday. After a two-hour delay at the Darren Sammy Stadium, the skies cleared long enough for the two captains to come out for the toss, with Afghanistan’s Asghar Stanikzai winning and electing to bat.

That was as far as it got; the drizzle resumed before the first ball could be bowled, and didn’t let up for the rest of the day. As a result, the three-match series ends in a 1-1 draw: an anti-climax, after the ICC Associate Member had shown some fire against the one-time legends in the first ODI of the series last Friday.

Afghanistan’s tour of the West Indies hadn’t started well; they lost all three T20 matches in their first week on St Kitts, the last one by seven wickets. When the action switched to St Lucia for the ODIs, the minnows surprised with a 63-run win in the opener.

This came courtesy of an Afghan innings of 212/6, including 81 from Javed Ahmadi and 41 not-out from Gulbadin Naib, followed by bowler Rashid Khan’s annihilation of the Windies batting. He finished with seven wickets, including two golden ducks, for 18 runs off 8.4 overs. The hosts collapsed to 149 all-out in 44.4 overs, with Khan’s first victim, Shai Hope, top scorer on 35.

The Windies came back in the second Darren Sammy ODI, dispatching Afghanistan for 135 in under 38 overs and taking less than 40 to knock up their 138/6 reply. Naib was nevertheless the top scorer in the game, on 51, so the visitors were eyeing an historic series win in the final match.

The Windies will also be disappointed that they didn’t get a chance at a victory. As a result of the draw, their ICC rating has slipped from 79 to 77, and they still lie ninth on the ladder; 23 rating points above Afghanistan. More worryingly, they are 16 points behind Sri Lanka, ranked eighth by the ICC.

If West Indies is to secure automatic qualification to the next ODI World Cup, they need to be ranked in the Top 8 by 30 September. They have tough series against India and England before then, and if they can’t close the gap and overtake Sri Lanka, they face arduous qualifiers in 2018.