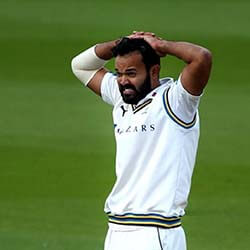 The latest development in the Yorkshire-Rafiq saga is that the club has now been suspended from hosting any further international cricket games by the England and Wales Cricket Board (ECB). Yorkshire also faces the possibility of considerable financial penalties.

According to an announcement by the ECB on Thursday, the unprecedented decision had been taken following growing political pressure and backlash. The board said the racial issues raised by Rafiq raise many concerning questions about how the club was being managed.

The board also announced that Gary Ballance has now been formally suspended from international duty after his admission regarding the use of offensive and racially charged language toward his former teammate. Although Ballance admitted to having been one of the players named by Rafiq in his complaint, he says he only ever exchanged “friendly banter” during their time as teammates.

Also revealed this week is an admission by former England captain Michael Vaughan regarding his own involvement in the saga. While Vaughan revealed he had been one of the players accused of Rafiq of racism, he has denied the accusation, and vehemently so.

According to Rafiq’s version of events, Vaughan had ahead of a 2009 match between Nottinghamshire and Yorkshire told a group of Asian players that there were “too many” of them on the team. Rafiq alleges to have been part of the group. Vaughan has however denied having uttered this.

According to the ECB, the club will remain prohibited from hosting international matches until such time as it is able to show itself able to meet the expectations and standards of international sport.