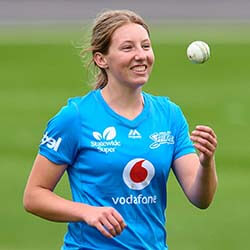 Australia seems set to dominate the world of women’s T20 cricket for quite some time. And about to add to the ranks and performance of elite Australian cricket is young fast bowler Darcie Brown, who has just scored a six-figure payday off the back of her debut national contract.

Brown is in fact the lone addition to Australia’s 15-player list, which list includes the entire T20 World Cup-winning squad – as well as most of the players who competed in the world record-smashing 24 consecutive one-day wins by the national side under the captaincy of Meg Lanning.

The star young cricketer made her maiden international appearance during Australia’s recent tour of New Zealand and is the chosen replacement for the recently-retired Delissa Kimmince.

What had created the opportunity for the exponential hike in remuneration had been the 2017 pay war – a fight that was fought with bitter and steely resolve. The end-result of all of that saw a massive $55 million paid out to women’s cricket, and with contracted women’s cricket players due to see a pay rise of up to $87,000 by 2022.

National selector Shawn Flegler says the young star has consistently shown herself to be the fastest-paced women’s bowler in Australia. She could emerge a powerful weapon for the national side ahead of next year’s one-day World Cup, said Flegler.

In terms of future prospects, Flegler said Brown has the potential of becoming part of a significant new-ball partnership alongside Tayla Vlaeminck for many more years to come.