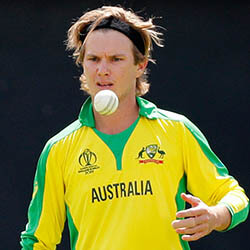 Adam Zampa, Australia’s No. 1 choice leg-spinner when it comes to Limited-Overs Cricket, has restated his ambitions regarding earning a place in the Baggy Greens. He says that the public’s perception of him as a White-Ball Bowler is wrong and something he intends to change.

The player, who is currently on a national contract with Cricket Australia, looks likely to complete his move to the New South Wales Blues once the embargo on domestic contracting is lifted. He has spent the past seven seasons with the Redbacks in South Australia.

This news comes after Stephen O’Keefe’s retirement from First-Class Cricket and will see Zampa playing home games at the most spin-friendly surface in Australia, the Cricket Ground in Sydney. He’ll be training and playing alongside Nathan Lyon along with most of the other Internationals in the New South Wales ranks.

Although the 28-year old tweaker will be kept busy in coloured clothes for Australia in the next 18 months, with two Twenty20 World Cups scheduled, it’s no secret that he wants to try his hand in the Sheffield Shield.

Zampa has said that playing Test Cricket is his ultimate goal and that he feels that the fact that he’s played most White-Ball games for Australia for the last couple of years has limited his opportunities in First-Class, where his record doesn’t really speak for itself. But, he added, that in the last three years, where he hasn’t been playing First-Class, he’s really improved as a bowler and getting that Baggy Green is the final plan.