Zimbabwe Banned by The ICC 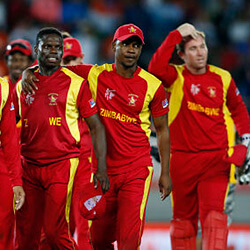 The International Cricket Council has given the country of Zimbabwe a suspension following a failure to ensure that there was no governmental interference in the running of the national team. ICC funding has since been withdrawn and the country has been banned from taking part in any ICC-related events.

Zimbabwe is due to participate in the T20 World Cup qualifier games that are set to take place during October this year. ICC chairman, Shashank Manohar told reporters that they need to keep the sport free from any political interference, and that what has happened in Zimbabwe is a serious breach of the ICC’s constitution and that they will not allow it to go unchecked any further.

The International Cricket Council implemented the punishment after the Zimbabwe Cricket Board was suspected by the government’s sports and recreation commission in June, and was replaced with an interim committee. The ICC has since said that they will be reviewing its decision at a board meeting that will occur in October.

The ICC first suspended the country’s Test status in June of 2004 after 15 of their players had been dropped out of the squad following the firing of captain Heath Strake. They played a total of eight Test matches in 2005 after the suspension had been lifted, but didn’t play another until 2011. They have also failed to qualify to take part in this year’s Cricket World Cup that’s set to be held in England and Wales.