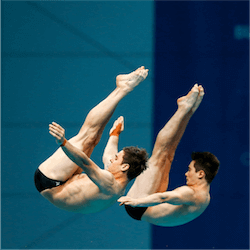 The most important annual diving event in the UK is upon us, with Plymouth Life Centre in Plymouth on England’s south coast hosting the 2018 British Diving Championships from January 25-28.

This is the sport and the country that gave us Jason Statham, so even non-diving fans among Australia’s punters might be scanning the line-up for a future action star. Perhaps one with a big, healthy head of hair this time.

Jokes aside, his year’s event has significance beyond the prestige of being the national championships; it’s also the final chance for British divers to shine before the selection of the Commonwealth Games team. Those who come out tops in Plymouth are almost assured of spots in the squad coming to Gold Coast in April.

McArthur Back to Defend Title

Scottish diver Gemma McArthur, reigning 10m platform champion, has already cleared all the qualifying hurdles to allow her selection for the British team going to the Commonwealth Games, but she’s going to want to put the issue beyond all doubt.

The 19-year-old missed selection for the 2014 Games in Glasgow by a whisker, so she’ll be eager to stake her claim by retaining the 10m title in Plymouth. If she can improve on her personal best, which she set in her last event, taking gold in the 10m at the 2017 Scottish Diving Championships in November, she’ll be hard to leave out.

At the grand old age of 23, Tom Daley is going to feel like a bit of a veteran on the 10m platform, compared to reigning champion Matty Lee. The 19-year-old Leeds lad will also want to retain his title, to give himself a shot at his first Commonwealth Games.

Another two for punters to watch in the men’s diving are Chris Mears and Jack Laugher. Whether as a synchro team or in solo competition on the 3m springboard, they both display prodigious talent.

Pandalela Rinong has recently made history after becoming the first individual medallist from Malaysia at the FINA Diving World Cup, which is being held in Wuhan, China. The medal came ….