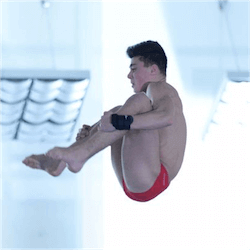 Matthew Dixon, who turns 18 only in April, took his second men’s 10m gold at the British Diving Championships in Plymouth last week. Dixon was only 14 in 2014, when he took his first BDC gold on the high platform, by an impressive margin of more than 30 points.

His gold medal in the 2018 competition’s closing event last Sunday came by a smaller margin, but he was still close to 10 points ahead of his nearest rival. On Saturday, he had also taken a silver in the men’s 10m synchro with partner Noah Williams.

His record has some similarities to Tom Daley’s at 17, who also had two 10m BDC golds in the bank at that age. In fact, Dixon’s first medal came in a year in which Daley was the reigning champion, but unable to compete.

Daley Missed Out Due to Illness

In 2014, Daley missed the British Championships because they clashed with his expert consultant stints on reality-TV programmes; a side-effect of his celebrity power at the peak of his career. Last week, Daley was forced to withdraw due to illness.

He also missed last year’s BDC, at which Matty Lee took gold. Dixon took silver in 2017, so Lee’s silver in the same event on Sunday saw the tables turned, although the Leeds star made some brilliant dives in the final rounds.

Daley remains the reigning world champion however, and if Dixon or 19-year-old Lee hope to follow in his trailblazing footsteps from teen prodigy to long-lived legend in his sport, they have a way to go.

Daley has six BDC 10m golds, three silvers and two bronzes, two Olympic bronzes, two Fina World Championships and a slew of other medals, not counting his accolades as a junior.

He’s still in the running for England’s Commonwealth Games team this year, and he’s publicly backed Dixon for a spot in the squad too. The addition of Lee to the team could make them a formidable trio when the Games start in Gold Coast on April 4.

Pandalela Rinong has recently made history after becoming the first individual medallist from Malaysia at the FINA Diving World Cup, which is being held in Wuhan, China. The medal came ….

British Diving Championships Precursor to Commonwealth Games The most important annual diving event in the UK is upon us, with Plymouth Life Centre in Plymouth on England’s south coast hosting ….