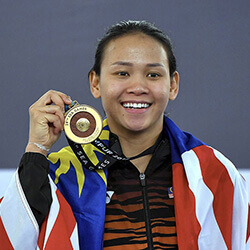 Pandalela Rinong has recently made history after becoming the first individual medallist from Malaysia at the FINA Diving World Cup, which is being held in Wuhan, China. The medal came after a comeback by the diver, where she ultimately went on to dominate the women’s 10m-platform competition.

Pandalela, an Olympic medallist, had previously only qualified for the semi-finals after she made it to 12th place, which was a disappointment to some. This didn’t last long, however, as the 25-year old managed to bounce back be finishing in third place in the top-18 semi-finals, where she scored a total of 347.15 points. She was behind contenders Ren Qian from China, who had 360.55, and Zhang Jiaqi, who was in the lead with 371.10.

The Malaysian diver continued to surprise as she moved into the final after coming back strong from sixth place. She scored two sets of 75.20 and 81.60 that pushed her to the bronze medal with a total of 349.15. The bronze was hailed as an achievement due to the fact that it was Malaysia’s first medal for a professional diving event.

It’s not over yet, and Pandalela is set to return to the event in Wuhan, this time with partner Jun Hoong at the women’s 10m platform synchro event. If all goes well for the due, Pandalela could be looking at earning another medal for herself and her country. Both are silver medallist winners from the 2016 Olympic Games.

British Diving Championships Precursor to Commonwealth Games The most important annual diving event in the UK is upon us, with Plymouth Life Centre in Plymouth on England’s south coast hosting ….