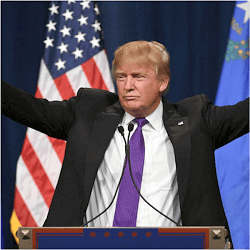 At the start of US presidential election campaign US pollsters had Hillary Clinton as a firm favourite with Trump in the minority. With the world in agreement, Australian betting agencies had Donald Trump at pretty decent odds of $6 or longer to actually pull off a win. When the controversial statesman secured a very unlikely Republican nomination, the odds dropped a bit to around $4.50 with most people thinking that it would be a cake walk for Clinton come Election Day.

On Tuesday morning, Trump went into Election Day at odds of around $4. The 70-year-old is well known to be a ruthless businessman and has been declared bankrupt more than 5 times. On the day, the presidential election boiled town to a two-horse race with Trump clearly the underdog. The betting odds for trump meant that statistically he had a 1 in 4 chance of winning the election and becoming president.

As the results started to come in from around the US, people all around the world stared at their television and computer screens in disbelief. With key swing states like Michigan, North Carolina and Florida all going Trumps way, the winning odds dropped dramatically as the world took a deep breath. By 2.30pm (AEDT), Trump odds had swung down passed the $2 mark all the way to $1.25. Meanwhile the odds for Hillary Clinton climbed to $4, giving her a statistical 1 in 4 chance of clawing her way back into the race.

As results continued to flow in and Trump’s smile widening with every passing hour, his odds has dropped even further down to a measly $1.07. Some betting agencies actually suspended betting all together which is what happens when a live event is effectively concluded. The astonishing results mirrored the strange events earlier in the year with the infamous Brexit debacle where a completely unforeseen result played havoc with all the betting agencies.

Virtually every pollster in the US and around the world had Hillary Clinton tipped for the win going into the election. With Trump closing in on the finish line, many people were praying for a miracle but it was not to be. Trump clinched the win shocking the world in silence. At the end of the day, the US appeared to have voted with their hearts and not their heads, leaving those who had wagered on Trump becoming the next US president with a rather unexpected windfall!

Boxing legend Manny Pacquiao, a sports star regarded as one of the best boxers of all time, says he’ll be running for president of the Philippines in 2022. The only ….

Brisbane Man Wins $100 000 Betting on Trump A local Sportsbet punter has pulled off an incredible win, racking up a total of $100 000 in winnings over a series of bets ….