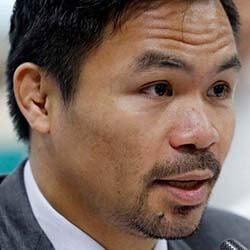 Boxing legend Manny Pacquiao, a sports star regarded as one of the best boxers of all time, says he’ll be running for president of the Philippines in 2022.

The only man to hold world titles across a record eight divisions, Pacquiao only days after the nomination of current president Rodrigo Duterte’s ally Christopher “Bong” Go as presidential candidate, accepted his own nomination during the national assembly of the current ruling party.

Go’s nomination is widely regarded as a cunning ploy for enabling Duterte to retain some form of power – not to mention his and his cronies’ comfortable relationship with China. Pacquiao has on several occasions spoken out heavily against his country’s corrupt government. And while Go has in the meantime declined his own nomination, recent developments have only created an even harsher rift between the factions of Duterte and Pacquiao.

Pacquiao, who turns 42 this year, says he’s always been a fighter – both inside as well as outside of the ring. He during a recent livestreamed speech publicly accepted his nomination as president of Philippines, saying he’ll continue his fight against corruption whether ultimately elected or not.

According to the sportsman-turned-politician, more than £145 million (roughly $199 million) in financial global health crisis aid intended for the poor remains unaccounted for by the current government.

Pacquiao, who is a former close ally of Duterte, has been warning corrupt government officials about impending jail-time should they continue raid the country’s already thread-bare coffers.

Brisbane Man Wins $100 000 Betting on Trump A local Sportsbet punter has pulled off an incredible win, racking up a total of $100 000 in winnings over a series of bets ….

Trump Betting Odds Swing as Election Day Ends At the start of US presidential election campaign US pollsters had Hillary Clinton as a firm favourite with Trump in the minority. ….