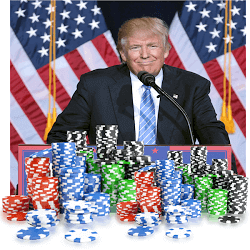 A local Sportsbet punter has pulled off an incredible win, racking up a total of $100 000 in winnings over a series of bets placed on the US Elections. The 39-year-old man from Brisbane placed several bets with Sportsbet, putting down a cool $27 000 for Trump to take the win. He placed the first bet at the start of the year before Trump had even won the preliminary Republican nomination. Speaking to the press, the man said that the complete uniform opinion that Trump would not win make him decide to take the bet in the first place.

The lucky punter used to work as a trained physiotherapist but subsequently quit his job to become a fulltime investor. He says that he never bets on anything other than property, the stock market or the elections.

The brilliant foresight came when the man decided that the world was stuck in a “emperor has no clothes situation” He said it was like finding a gem hiding in plain sight that every else was overlooking. He went on to explain that he believed that the pollsters and the Australian betting markets were underestimating Trumps chances.

Altogether, Australian bookmakers, Sportsbet, William Hill and TAB paid out over $18 million to Trump punters this last week. Sportsbet alone paid out $11 million with William Hill only paying $3 million and TAB a total of $4 million. Speaking on behalf of Sportsbet, spokesman Ben Bulmer described the win as a remarkable victory. He went on to say that in the US elections, the punters beat the odds with more than 25,000 Australians successfully predicting the outcome of the election despite all the polls and the betting data suggesting that Trump has no chance at all.

The punter who pulled in $100 000 made sure to do his homework before forking out $27 000 in bets. He explained that he watched the trends in world politics and realised that he was seeing the same trends and that led to Brexit, while no one else took notice. In the week leading up to the election, all the pollsters, bookmakers and financial markets were completely convinced that Trump would fail. It was their eagerness to believe that he couldn’t win that blinded them from the truth. With his winnings, the man said he would probably buy his girlfriend some jewellery, and then invest the rest.

Boxing legend Manny Pacquiao, a sports star regarded as one of the best boxers of all time, says he’ll be running for president of the Philippines in 2022. The only ….

Trump Betting Odds Swing as Election Day Ends At the start of US presidential election campaign US pollsters had Hillary Clinton as a firm favourite with Trump in the minority. ….