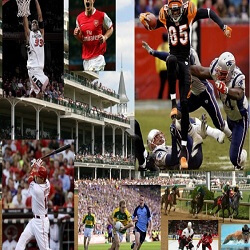 The second half of the year is well under way, and there have already been some great sporting events for online betting enthusiasts to wager on, but things are not over by a long shot!

Sports betting is an unofficial national pastime in Australia, and there’s plenty to enjoy for the rest of the year. Lets check out what’s happening on the sporting calendar now.

The Caulfield Cup kicks off on the 24th of September. It’s a Thoroughbred Group One race held by the Melbourne Racing Club, for horses 3 years and older.

Its purse is AUD3, 000,000, so it always attracts top riders and is well worth checking out.

TAB Epsom Day’s total prize money is even higher than the Caulfield Cup’s, providing plenty of online betting opportunities, even if you can’t get there in person.

Epsom’s full day of action is scheduled for Saturday the 1st of October, and is a main attraction in Sydney.

The NRL Grand Final takes place the day after Epsom Day in Sydney, on Sunday the 2nd October and determines the season’s premiers.

This competition to determine the AFL premiership champions has always been popular in sports betting, and is always held on the first weekend in October.

Due to be held on Sunday the 9th of October at Sydney Olympic Park, the Constellation Cup is a Netball trophy annually contested by the Australian Netball Diamonds and New Zealand Silver Ferns. There are plenty of online betting markets catering to netball fans, making wagering on this Cup all the more exciting.

Described as a 3-day event in motorsport and its culture, the Time Attack Challenge brings together the fastest time attack teams from all around the globe. The action starts on the 14th of October, in Blacktown.

This year’s Cox Plate takes place at Royal Randwick on the 22nd of October. It’s also for Group One Thoroughbreds, and involves weight-for-age corrections. It’s the second-richest weight-for-age race in the country, so it always attracts top performers and makes sports betting very enticing.

Another huge event on Australia’s racing calendar, the Melbourne Cup is the richest two-mile handicap in the world. Online betting fans won’t want to miss any of this action, which culminates in the Melbourne Cup Race Day on the 1st of November.

The Southern Hemisphere’s biggest action sports event, the Aus-X Open promises many great sports betting opportunities over the 12th and 13th of November.

From the 17th to the 20th of November spectators and punters will get to enjoy the most prestigious and historical of Australia’s golf championships.

All of these events provide plenty of online sports betting opportunities and are sure to make the rest of 2016 even more rewarding.