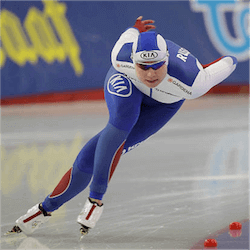 Fatkulina was one of the Russian athletes stripped of her 500m silver medal from the Sochi Olympics in 2014 after an International Olympic Committee investigation into systemic Russian doping, and she is also barred from competition in the 2018 Games.

No official Russian team will go to PyeongChang, although Russian athletes not found guilty of any doping offences will be allowed to compete as neutral individual ‘athletes from Russia’. Fatkulina is not one of them.

So how, fans want to know, was she in the winning Russian women’s team sprint squad in Kolomna from January 5-7? The fact of the matter is that despite the IOC sanction, Fatkulina has not yet been suspended by the ISU, so she is still fully entitled to compete in non-Olympic events.

This is an anomaly the ISU needs to correct, if it wants to retain credibility in the eyes of fans and the trust of the online betting community. Nobody wants to punt on a rigged game.

Of the nine countries that finished among the medals at the 2018 European Speed Skating Championships, the Netherlands and hosts Russia were far and away the most dominant teams, taking 27 of 42 available medals between them.

The Netherlands finished top of the medals table with six golds, three silvers and four bronzes for a tally of 13. The Russians took 14 medals in total, but only five golds, along with six silvers and three bronzes.

There was a marked drop-off from third place on the medals table: Italy took only two golds and two silvers, and Austria a gold, a silver and a bronze. Finland took two silvers, Germany and Poland two bronzes apiece, while Czech Republic and Norway managed a bronze each.

After their performance in Kolomna, the Netherlands are by far the most successful all-time European Speed Skating Championships team, with 45 medals each in gold, silver and bronze, for a total of 135.

US figure skaters who competed in the controversial event that involved a Russian doping case were reportedly given torches as “hold-over gifts” by IOC president Thomas Bach. A final resolution ….