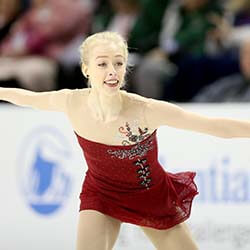 US figure skaters who competed in the controversial event that involved a Russian doping case were reportedly given torches as “hold-over gifts” by IOC president Thomas Bach. A final resolution of the case involving Russian figure skater Kamila Valieva remains up in the air after the young athlete was proclaimed a protected person due to her age.

According to two people closely familiar with the events, no medal ceremonies will be held for any of the events involving Valieva. This means the US skaters will have to wait a while longer before being awarded their silver medals.

The US finished runners-up behind Russia in the team figure skating event. The final outcome was however immediately after the event plummeted into absolute chaos when several reports started to circulate regarding Valieva having tested positive for the banned substance trimetazidine.

At the 2018 Pyeongchang Olympic Games, Russian bobsledder Nadezhda Sergeeva tested positive for the same banned substance. She was ultimately disqualified from the bob event and slapped with an eight-month ban by the IOC.

The court of arbitration (CAS) ruled earlier this week that while Valieva would still be required to pass through the anti-doping system, she remained eligible to compete in Tuesday’s women’s event.

The nine-person US squad will be awarded at least a silver medal – but could even end up being given the gold in the event of a disqualification outcome for Valieva.

According to Associated Press sources, the Olympic torches typically used during Olympic the Olympic flame relay had already been given to staff to hand to the relevant figure skaters.