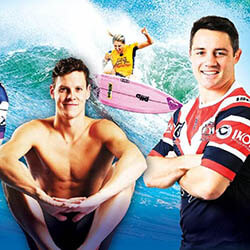 Australian sports codes are locking fans out in the wake of the coronavirus pandemic. It’s already forced the cancellation of the Formula One Grand Prix and numerous other events the world over.

From now on, National Rugby League games will be held in empty stadiums, as will the Men and Women’s Australian Football League matches. Basketball authorities have also closed the Grand Final Series of the NBL to spectators, and Rugby Union’s Super Rugby games will also be following suit. Next month’s National Swimming Championships have been called off.

The Australian Grand Prix was the first sporting event in this country to get cancelled due to COVID-19. Organisers stopped the season opener as spectators started queuing to enter the Melbourne Albert Park circuit after 14 people linked to the race were tested positive. One of these was a member of the McLaren team.

Supercars races have additionally been cancelled and Super NetBall’s pre-season competition later on in March has been scrapped as well.

Games either being suspended, cancelled, or being held without spectators is the only option open to sports codes in Australia after Prime Minister Morisson announced the ban. Chief Executive of the NRL Todd Greenberg said that the landscape is changing incredibly quickly, and each organisation has its own set of challenges. But Gillon McLachlan, Chief Executive Officer of the AFL, said that the health of clubs, fans players, and officials remains everyone’s highest priority.

As Cricket Australia Chief Executive Kevin Roberts said, in the face of a public health issue this unprecedented, this tactic is simply common sense.

A groundbreaking and potentially controversial policy announced by the US Olympic and Paralympic Committee earlier this week means US athletes hoping to compete in the 2022 Winter Olympics will have ….

South Australia has decided to enforce its requirement of a double quarantine for athletes returning from this year’s Tokyo Olympics. The 16 sportsmen and women will have to spend 28 ….

As the story continues to develop, grow, and take a life of its own, another piece is added to the puzzle. Her claims, while labeled idiotic by Jack Riewoldt, appear ….

Olympic organisers have now confirmed that around 10,000 of the 80,000 registered volunteers signed up for supporting athletic events during this year’s Tokyo Games, have officially quit. And while the ….

Ukactive Chair Calls On PM To Do More

The world of sport and physical exercise continues to suffer from the ongoing effects of the global health crisis. And according to a warning issued by Dame Tanni Grey-Thompson, Chairperson ….