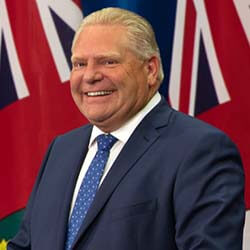 Ontario premier Doug Ford on Monday announced an accelerated lifting of the limits in place on indoor sporting events. The announcement will from Thursday onwards allow 50 per cent of seating capacities to be filled in the province’s sports arenas.

This announcement comes as good news for the Toronto Maple Leafs, who will be hosting Pittsburgh on Thursday and St. Louis on Saturday. The Ottawa Senators, too, will enjoy the new freedom when they host their first game under the new rule against Boston on the weekend.

Maple Leaf Sports and Entertainment (MLSE) can now begin working towards the next phase of reopening, with the focus of welcoming fans back to its venues, the organisation said in a statement following Ford’s address. MLSE said it remains fully committed to provincial health and safety protocols. It also thanked government and public health officials for the tireless work that had gone into reaching the point of full operations in a safe setting for all fans, staff, and the broader community.

Full operations are expected to be allowed to return on March 1.

Ontario has erred on the side of the cautionary in terms of fan attendance. The Toronto Maple Leafs averaged only 18,819 fans through 17 games played at home this season. The Raptors averaged 19,777 supporters across 15 home games before capacity limits were once again limited to 50 per cent last December.